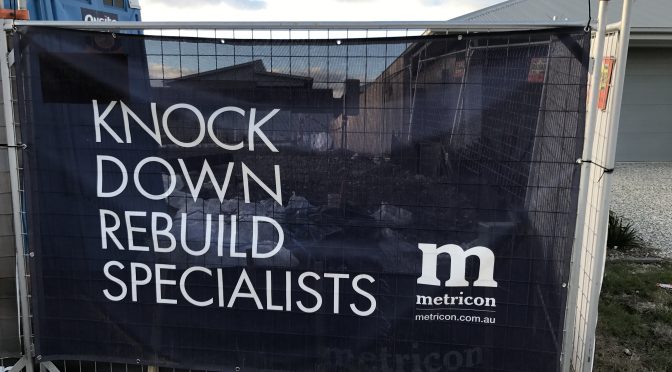 I took the time to read right through the Softley v Metricon Homes Pty Ltd decision that was published by VCAT on 11 December 2014. Metricon was ordered to pay costs to knock down and rebuild the Softley’s house.

If I was a builder of waffle slabs I would be reading this decision very, very thoroughly.

The information in this decision describes the important steps in diagnosing and determining the cause of slab heave. The thing is, the Softley’s house exhibited only 44mm of uneven slab surface movement.

In contrast, just recently in the Ipswich suburb of Bellbird Park I recorded slab surface uneveness in the order of 110mm in a newish home.

So how is it that 44mm of movement gets a house rebuilt and 115mm only gets an engineer’s investigation and report.

Waffle Slab Builders Should Be Nervous

I’d like to reiterate. If I was a builder of waffle slab homes I would be very, very nervous. It’s maybe lucky that the suburb of Melton is quite some way from Bellbird Park; because when Brisbane and Sydney and Adelaide and Emerald (Central Queensland) home owners discover that the precedence  has been set for demolition and reconstruction of poorly performing waffle slab homes (with a measly 44mm of differential slab surface movement), then the flood gates of building tribunals and court cases is going to open.

Poor moisture maintenance around a waffle slab house is probably inevitable. There’s so many things that could go wrong.

Just remember where you were when you discovered that the cracks in your house could be enough that a claim against the builder might result in the builder being forced to rebuild your home.

I’m not ambulance chasing. The ambulance has already left.

You didn’t hear it from me.

6 thoughts on “The Inevitable Failure of Waffle Slabs”